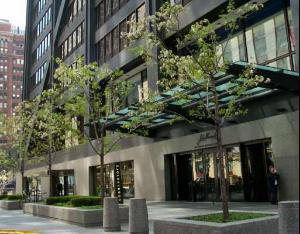 The Economoses acquired the property in March 2004. The 1,494-square-foot Unit #5010 is part of the John Hancock Residences, a condominium development that was built in 1969.

Forero has served as the president and chief executive officer of Lyon & Healy, a harp manufacturer that was established in 1889.

Rayan-Forero is a harpist who has been performing internationally for more than 20 years. She has also performed with orchestras such as the Puerto Rico Symphony, Entre Rios Symphony, Cordoba Symphony and the National Symphony Orchestra of Buenos Aires. She previously worked as an associate instructor for four years.

She graduated from Indiana University.

According to BlockShopper.com, there have been 580 condo sales in Gold Coast during the past 12 months, with a median price of $336,250.