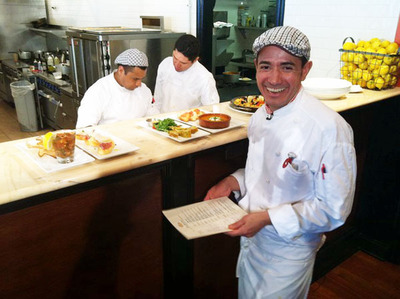 Named after casual corner eateries in Spain, La Taberna -- featuring the flavors of Spain's Basque region, Latin America, Mexico and the Mediterranean -- will soon be hosting Brazilian nights every Tuesday, which will include Samba and sangria. The restaurant will be featuring Samba lessons, music, and anything and everything Samba related.

Samba, the national dance of Brazil, is a lively, rhythmic dance to the sensual Samba music.

"Whether you know what you're doing or not, join us on Tuesday night for Samba and sangria," said Alex Cabrera, owner of La Taberna Tapas.

La Taberna Tapas, a vibrant University Village eatery, serves Spanish, Mediterranean and South American-influenced tapas. In the kitchen, Enrique Cortez (most recently at Ole Lounge) cooks up dishes such as beef empanadas stuffed with raisins, queso fresco and garnished with avocado mousse. La Taberna Tapas also offers paella -- made with saffron rice, pork, chicken, chorizo and squid -- and several entrees cooked and served on cedar planks, including Cornish hen and Alaskan salmon. The space is decorated with red chandeliers, a granite bar and recreations of paintings from Spanish artists such as Joan Mir?. Also on the menu are three house sangrias -- one infused with blueberry and ginger, one tinged with lavender and another made using jalapeno-flavored tequila -- all served sample-sized as a flight.

For more information about La Taberna Tapas' Brazilian nights or anything else, call 312-243-9980, view the tapas restaurant on the Web at www.latabernatapas.com or visit La Taberna Tapas at 1301 S. Halsted St. in Chicago.

Named after the casual corner eateries in Spain, La Taberna features the flavors of Spain's Basque region, Latin America, Mexico and the Mediterranean. The menu is executed by Enrique Cortez.

Many of the libations include infused tequilas, such as pineapple in the Margarita de Dona Inez, lavender in the Sangria Catalana and jalapeno in the Sangria Brava. Beers range from Mexican imports to American crafts, and worldly wines are offered from various regions in France, Spain, Argentina, Chile, Sicily and California.

La Taberna is open for lunch and dinner daily. Every Friday at 8:00 p.m., you can find live music performed by Spanish guitarist David da Costa. On Saturdays, enjoy music played by a live band.