No bones about it: He was born to play music 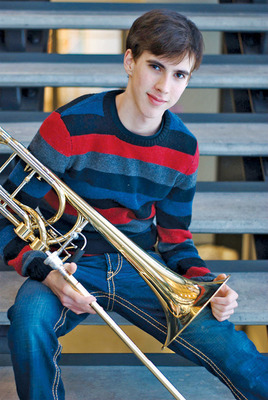 Cypress musician Andre Prouty let his love for the arts guide him into a budding career that is sure to blossom full scale.

“As long as I can recall, there has always been music playing in my house,” Prouty said. “There was jazz, there was classical, rock and all its deviations; you name it, and it was probably being played in my home with me there soaking it up like a sponge.”

He said his father’s diverse and eclectic tastes started his journey.

“I owe it to him for planting a seed in me and sparking my interest and intrigue in music from a very early age,” he said.

Prouty started his musical endeavors at age 8 by taking piano lessons for many years. In sixth grade, Prouty began to play the guitar. Later, when he joined the school band, his director, a trombone player, persuaded him to give the trombone a try.

Six years later, Prouty was still playing the trombone. He’d been playing with the Houston Youth Symphony for quite some time when his grandmother told him about an art camp put on by the Interlochen Arts Academy in Michigan.

“I ended up sending an audition tape and soon after was invited to play in the camp’s premier performing ensemble, the World Youth Symphony Orchestra,” Prouty said.

Prouty was then invited to attend the school; he spent his senior year at Interlochen’s boarding school nearly 1,500 miles from home.

“The second semester brought college auditions,” Prouty said. “I set my sights high with my first choice being the notoriously choosy Juilliard School, but unfortunately, I did not get into Juilliard that year.”

Prouty spent his freshman year of college at the University of Houston’s Moores School of Music. When he auditioned the following year for Juilliard, he was accepted. He will finish his undergrad studies there.

Prouty said he hopes he’ll find himself in a position with an established symphony orchestra either in the United States or Europe. He also wants to arrange and conduct.

“If I can make a comfortable living for myself doing what I love, I will consider myself successful no matter what it is I am doing specifically,” Prouty said.