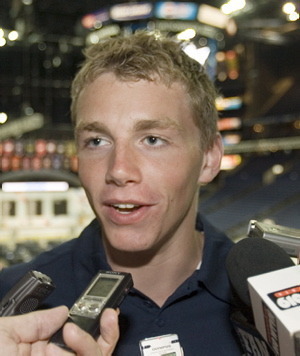 Chicago Blackhawks right winger Patrick Kane bought the two bedroom, 2.5 bath condo Unit #33J in the Trump International Hotel and Tower at 401 N. Wabash on the Near North Side for $2.06 million from the Trump Organization on Sept. 29, 2008.

Kane, 20, appeared in all 82 games of his rookie campaign with the Blackhawks in 2007-08, scoring 21 goals and adding 51 assists as the Blackhawks recorded their first winning season in six years. Drafted by the club first overall in the 2007 NHL Draft, Kane earned the Calder Trophy as the NHL's top rookie, the eighth player in franchise history to win the honor. He also led the team and NHL rookies in points, and established a franchise record for rookies with his 51 assists.

Originally from Buffalo, N.Y., Kane played for the London Knights of the Ontario Hockey League in 2006-07 and suited up for Team USA at the 2007 World Jr. Championships.

Kane's teammate and fellow 2007 draft pick Jonathan Toews spent $1.475 million on a condo in The Chandler in Streeterville on July 24.

Completed in Sept. 2008, the 96-story Trump International Tower and Hotel is the second tallest building in the United States and the 11th tallest building in the world, topping out at 1,362 feet. It houses 486 residential units along with nine floors and a total of 339 luxury hotel guest rooms, suites and spa rooms. There are also nine floors of lobbies and retail space in the building, which was designed by architectural firm Skidmore, Owings and Merrill.