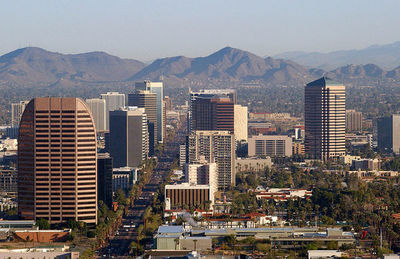 Michael Hampton has listed for sale their six-bedroom, seven-bath home at 8601 N. 59th Place in Paradise Valley for $4 million.

The 9,297-square-foot house was built in Paradise Valley North. It is located in Equestrian Trails subdivision. Frank Aazami of Sotheby's International Realty is the agent for the listing.

Mr. Hampton is a former Major League Baseball pitcher who player for teams such as the Arizona Diamondbacks, Houston Astros, Atlanta Braves, Colorado Rockies and New York Mets. His professional baseball career starter when he was drafter by the Seattle Mariners in 1990.

He is the unprecedented record holder of five consecutive Silver Slugger Awards, a prestigious recognition given to the best offensive player at each position in both the American League and the National League.

According to BlockShopper.com, there have been 162 home sales in Paradise Valley during the past 12 months, with a median sales price of $1.192 million.