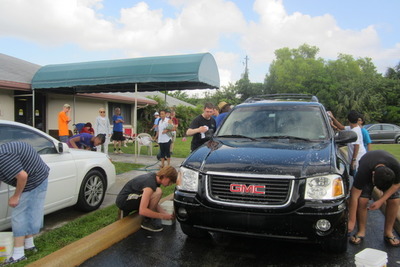 The Aktion Club had their car wash last Saturday and they raised $125.

Tony from the Cooper City Club ran the grill and cooked up hot dogs that were dontated for the event.

In total, seven cars were washed.

This was the first Aktion Club fundraiser for the Kiwanians and Key Clubbers who came out, and there were plans to have more.

McFatter Key Club President Josh Braverman and his mother bought lunch for the Key Clubbers and residents of the group home where the event was held.

Members of the group posted the photos of the event on the Kiwanis Division 24 Facebook page.